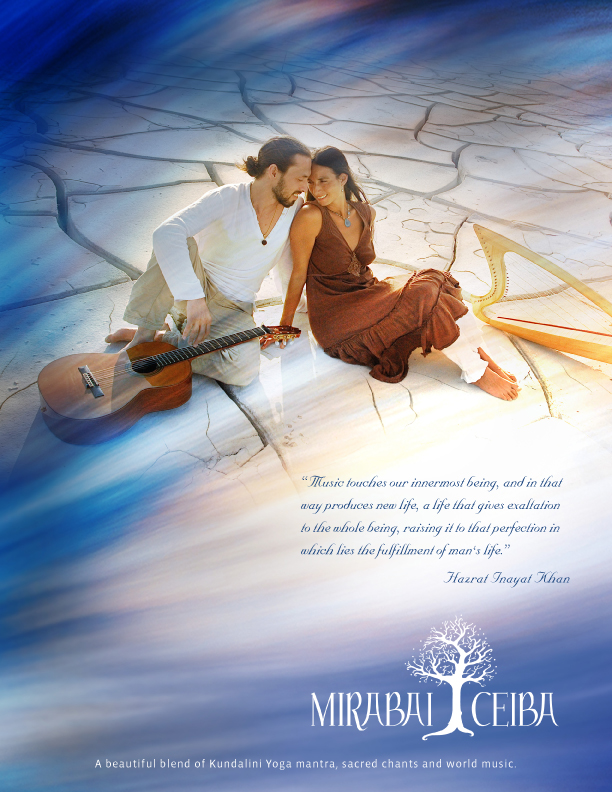 A gentle yet expansive spirit pervades all the music of Mirabai Ceiba. The delicate sounds of harp, piano, and guitar blend with lovingly intertwined voices amid lush celestial soundscapes. Their concerts are group celebrations for peace—joyous and loving occasions that embody the duo’s profound belief in music as a universal language uniting all the world’s peoples, cultures and traditions.

Mirabai Ceiba is a duo consisting of guitarist/singer Markus Sieber and singer/harpist/keyboardist Angelika Baumbach. They come from different parts of the world. Markus is East German. Angelika was born in Tucson, Arizona, and grew up in a small village near Mexico City, the daughter of a Mexican mother and German father. Markus and Angelika first met at a street fair at Scotland’s Edinburgh Fringe Festival and quickly fell in love. Markus was pursuing a successful acting career at the time, and Angelika was touring the world as a singer/ songwriter. But the newly formed couple decided to share their love with the world through uplifting music steeped in spirituality, tenderness and beauty.

Together, Angelika and Markus have forged engaging new style of world devotional music blending Gurmukhi mantras from the Kundalini Yoga tradition with original songs in English and Spanish that reflect a Native American influence and also draw words of wisdom from Rumi, Thich Nhat Hanh, Guru Nanak and Yogi Bhajan.

Through exquisitely crafted recordings like their CD A HUNDRED BLESSINGS, Mirabai Ceiba weave a beguiling tapestry from these diverse influence and sources. And that’s what the music feels like: a beneficent and abundant gift from the universe. In concert, they inspire all present to chant together in a spirit of

Even the name Mirabai Ceiba embodies the influences of both India and Native Latin America. Mirabai (1498- 1547) was a Hindu mystical singer. Her songs express the longing of the individual self to be one with the universal self, represented by Krishna. For Angelika and Markus, the name Mirabai „is the exploration, the

devotion, the inspiration in all the different aspects of divinity.“

And the Ceiba is a sacred tree of Latin America which is never cut and grows very tall. „We wish our music could be like the Ceiba tree,” say Markus and Angelika, “with roots deep in Mother Earth and branches extending far and wide into Father Sky.“

“Mirabai Ceiba, with their music, take us into this divine realm of spirit that we all long for.” Snatam Kaur

“Their Music comes from a pure space of Love.” Deva Premal

“Mirabai Ceiba’s album is titled A Hundred Blessings. And that’s what the music feels like: a beneficent and abundant gift from the universe.” Alan di Perna, writer for Yoga Journal and Rolling Stone

Under the plan, restaurants, movie theaters and large sporting venues will be allowed to reopen under certain conditions.

Arizona has quite a few caves, but not many also boast crystal-clear, sapphire waters. This hidden alcove can be found at the end of Fossil Springs Trail, and it truly belongs on everyone’s bucket list.

The U.S. House approved legislation Wednesday to permanently ban uranium and other hardrock mining near the Grand Canyon.  The bill from Arizona Rep. Raúl Grijalva, chairman of the House Natural Resources Committee, passed by a vote of 236-185.

We fight Climate Change through outreach, restoration, and research. Some of the Earth's greatest landscapes are threatened by increased road construction, oil and gas exploration, and mining. We aim to protect these areas from inappropriate development, but we cannot achieve our goals alone. Find out how you can help.

The Hippies Were Right: It's All about Vibrations, Man! | Scientific American Blog Network

Did the hippies actually solve this problem? My colleague Jonathan Schooler of the University of California, Santa Barbara, and I think they effectively did, with the radical intuition that it’s all about vibrations … man. Over the past decade, we have developed a “resonance theory of consciousness” that suggests that resonance—another word for synchronized vibrations—is at the heart of not only human consciousness but of physical reality more generally.

The Universe Itself Is a Giant Brain and It May Be Conscious, Say Scientists | Project Yourself

There is no need to look far in order to find outlandish theories on the nature of cosmos, and also of human consciousness. In recent times, notions once relegated to science fiction found their way into the esoteric academic journals, and after that into the mainstream discourse. One such example is the Simulation Argument, which was recently championed by Elon Musk. Another example is ‘time crystals,’ which are a tantalizing non-linear phase of matter.

Intuition Is The Highest Form Of Intelligence | Forbes

Intuition, argues Gerd Gigerenzer, a director at the Max Planck Institute for Human Development, is less about suddenly "knowing" the right answer and more about instinctively understanding what information is unimportant and can thus be discarded.