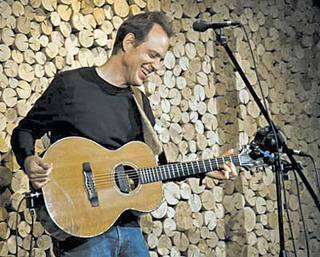 Cleveland-born David Wilcox was inspired to play guitar after hearing a fellow college student playing in a stairwell. His lyrical insight is matched by a smooth baritone voice, virtuosic guitar chops, and creative open tunings, giving him a range and tenderness rare in folk music.

He released an independent albumin 1987, was a winner of the prestigious Kerrville Folk Festival New Folk award in 1988, and by 1989 he had signed with A&M Records. His first release on the label, 'How Did You Find Me Here,' sold over 100,000 copies the first year largely by word of mouth. Now, 17 albums into a career marked by personal revelation and wildly loyal fans, David continues to find and deliver joy, inspiration, and invention.

Considered a 'songwriter's songwriter', his songs have been covered by artists such as k.d. lang and many others.

In addition to his writing prowess, his skills as a performer and storyteller are unmatched. He holds audiences rapt with nothing more than a single guitar, thoroughly written songs, a fearless ability to mine the depths of human emotions of joy, sorrow and everything in between, and all tempered by a quick and wry wit.

Reflecting on well over 20 years of record-making and touring extensively around the United States and world, Wilcox says, "Music still stretches out before me like the head-lights of a car into the night. It's way beyond where I am, but it shows where I'm going. I used to think that my goal was to catch up, but now I'm grateful that the music is always going to be way out in front to inspire me."

For more information please contact the Sedona Performing Arts Alliance/Studio Live at (928) 282-0549. Tickets are available online at www.studiolivesedona.com or at the Studio Live box office located at 215 Coffeepot Drive in West Sedona.

Under the plan, restaurants, movie theaters and large sporting venues will be allowed to reopen under certain conditions.

Arizona has quite a few caves, but not many also boast crystal-clear, sapphire waters. This hidden alcove can be found at the end of Fossil Springs Trail, and it truly belongs on everyone’s bucket list.

The U.S. House approved legislation Wednesday to permanently ban uranium and other hardrock mining near the Grand Canyon.  The bill from Arizona Rep. Raúl Grijalva, chairman of the House Natural Resources Committee, passed by a vote of 236-185.

The Hippies Were Right: It's All about Vibrations, Man! | Scientific American Blog Network

Did the hippies actually solve this problem? My colleague Jonathan Schooler of the University of California, Santa Barbara, and I think they effectively did, with the radical intuition that it’s all about vibrations … man. Over the past decade, we have developed a “resonance theory of consciousness” that suggests that resonance—another word for synchronized vibrations—is at the heart of not only human consciousness but of physical reality more generally.

The Universe Itself Is a Giant Brain and It May Be Conscious, Say Scientists | Project Yourself

There is no need to look far in order to find outlandish theories on the nature of cosmos, and also of human consciousness. In recent times, notions once relegated to science fiction found their way into the esoteric academic journals, and after that into the mainstream discourse. One such example is the Simulation Argument, which was recently championed by Elon Musk. Another example is ‘time crystals,’ which are a tantalizing non-linear phase of matter.

Intuition Is The Highest Form Of Intelligence | Forbes

Intuition, argues Gerd Gigerenzer, a director at the Max Planck Institute for Human Development, is less about suddenly "knowing" the right answer and more about instinctively understanding what information is unimportant and can thus be discarded.